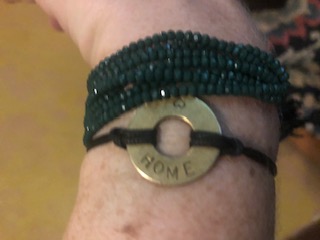 We Carry Home Inside of Us

My new husband and I have been on a house hunt ever since we learned that we would have to move out of our rented house 9 months ago.

I got married at 45 for the first time, and in my ridiculously long stint as a single lady, I participated in an inordinate amount of online first dates. I thought those days were behind me, but house hunting felt remarkably similar to online dating.

My heart would race when I saw a picture of a house that might work out (much like that guy Mike with the great picture on e-harmony.) I would check all the stats….how do the pictures look? How many bedrooms? What’s the proximity to work?

Not unlike Mike in his profile with his great hair and right age and his claim that he “just loves to camp.”

Most of the showings we went to brought back PTSD from so many of those bad first dates. “Woah, this looks nothing like the picture!” And, “is this really all there is left in the world?!!”

After many months of searching, we found a gem of a house that I loved near Marshall, North Carolina,  the darling small town where my husband I fell in love. Our first showing of that house felt a lot like that first date with Ben from match.com. Just like that rare date, this was a house where I felt chemistry and connection and potential.  I was internally doing cart wheels. “Even better than the pictures!” “This is it! This is the one!”

I prayed and prayed that this house would work out, almost as fervently as I prayed it would work out with Ben all those years ago.

Alas, our hopes were dashed when we found that the owner was a bit of a conspiracy theorist that did not trust any coreperations. He insisted that he wanted us to pay him the money for the house in cash.

Not like a cashiers check from a bank, but paper money cash, completely separated from any banks whatsoever.

He said to us “You know in the movies where the robbers are given bags with stacks of hundred dollar bills in it?

That’s what I want.”

My friend Shallyn commented on this when I told her the saga. “Do you know who wants cash like that? Gangsters. That’s who.”

It was still looking like Ben and this house had a lot in common. Ben looked good at first, but had a lot of problems under the surface. This house was the same way. Too good to be true because it was.

And yet, just like with Ben, I tried and tried to make it work. I talked to friends in real estate, other friends that were experts in negotiation, friends who gave me hope there might be a way.

But there just was no way. We didn’t have stacks of cold, hard cash.  And just like with Ben from match.com, I had to resign to the fact that there were just too many problems. I had to move on and believe that God had something better.

About the same time that our Marshall house dreams were falling to the wayside,  we were given the opportunity to buy a cancelled order cabin online that was half the original price. We had a lot of pressure put on us because someone else wanted to buy it, so we just did it. Sight unseen. All we had was a picture and the hopes that we had made the right crazy choice.

Could this be the equivalent of an online Russian bride, where you have to commit before you even see her in person? Perhaps that is taking the metaphor too far.

So now, while we are waiting with anticipation and working so hard for the loan to come through, we have the materials for a beautiful cabin and not enough money to build it (as of yet.)

And so in the mean time, we are living on a bus with my two step daughters.

Yes folks. You heard me right. A bus.

People who know me know I like to dress and decorate  boho- chic and love all things hippie. I definitely have that summer-of-love vibe. But my entire life, if anyone has ever called me a hippie, I have said “I’m not a hippie! I don’t live on a bus!”

Then we got married at a place called Nomad’s Land where our guests stayed in tree houses, double decker buses, and cabooses. Oh yeah, and also we spent part of our honeymoon in a hobbit house.

Still not a hippie.

But here we are , a few months later, and I am not just visiting a bus. I live on a bus.

I guess I am now officially a hippie.

To be fair, we sleep on the bus, but up the hill about 700 feet we also have a tiny round house the size of a living room with the teeny tiniest kitchen you have ever seen and a small bathroom. So maybe not totally hippie.

Here I am, living in this teeny tiny place with my absolutely beautiful, prayed for for 25 years, new precious family.

When my husband told me this might be our only choice budget wise for a season while we waited on our loan, I thought I would absolutely hate it and that the close quarters after so many years alone might just kill me.

But wonder of wonders, I don’t hate it. I am quite happy on my bus, because I love my sweet little family so much.

I was thinking about our predicament the other day and realized that God had prepared me for this time on our bus before I had any idea it would happen.

Two years ago on New Year’s Day,  some friends and I created “vision boards” cutting up magazines to create boards where we placed vision and words to what we wanted to work towards happening that year.

I knew what I wanted for that vision board. Justin and I weren’t married yet, but it was getting serious. I had moved every year of my life since I was 18. I hated all that moving. I was so done with it. There was one thing I wanted if we were to get married, and that a place for my new family and I.

So I emblazoned one word across that vision board.

At the time, I was living in an eco village with several acrobats and massage therapists. Not making this up. (And yet I would still say I was not a hippie.)

It was a pretty rad place to live (I would have paid good money for the acrobat shows I got to see in the studio behind my house when the 9 of us quarantined together.) But my room was absolutely tiny.

After I created the vision board, I said “Does anyone want this? Ironically I have absolutely no space in my tiny room to put my vision board that says ‘home’ on it.” I said this with more than a little bit of venom in my voice. Would I ever have a place to call home? I ended up throwing the vision board away.

A few weeks later, my amazing dance teacher came up to me after class and asked me if I had chosen a word that would guide my year. “Yes,” I replied. “My word is home.”

The next week, she brought a bracelet she had made me with one word on it.

Maybe home is not a place. Maybe you carry home inside of you.”

That was it. That was the key I needed.

I still wear that bracelet on my arm to remind me that home is not a physical roof over my head or walls around me. Home is a place that God and I build together.

We have built a foundation of a weathered faith that is still so strong after all these years. Every challenge we face together is a new hallway in that house. A hallway that will lead into a whole new room once we have walked together through that challenge.

And the roof that covers me and my family is not built by mortar and bricks. It is built on this deep deep love that has always, always covered us.

Whether I live on a bus or in a cabin or in a mansion, it doesn’t really change that home inside of me.

And so, even in this strange season of waiting and longing, in this unique time where I lay my head in a place that used to roll down the road with school children, I can hold onto this one thing.

I don’t need to look for home, because I am already home.

Home is with me wherever I go.

I carry home inside of me.

If you are longing for home like I am, be reminded of this wondrous truth.

You don’t have to look outside for a home. You carry home inside of you.

It’s your choice, as you walk hand in hand with God, to make that home beautiful.