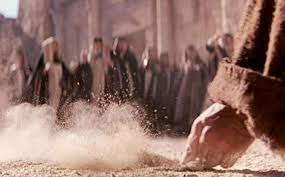 The Message in the Sand

This morning when I woke up,  my husband called me into the bathroom. He had just taken a shower, and the steam had revealed a message that my sweet 14 year old step daughter had written on the mirror with her finger.

“I ❤️ Katy.” (That’s what my stepkids and my husband call me as a term of endearment.)

Besides being touched by this (my step daughter has from the first day she met me loved me unconditionally even in my very weakest moments) I also thought about how beautiful it was that that message wasn’t a note or letter that I could keep.

It was a message in a mirror that I would only see once and then it would disappear.

But I needed it. I needed it on that 9:30 in the morning October day.

A week after a horrible car accident that if happened any differently could have seriously injured me or been fatal. The whole front end of my car was nearly ripped off.  I am 100% grateful that I wasn’t hurt, but also 40% concerned about the financial implications of getting a new car.

A day that the new sleep medication I was trying out after a lifetime battle with insomnia and sleep meds was seemingly making me really sad and exhausted.

A week where the process of building our house had one more hurtle in a long marathon of hurtles and I was wondering if a home for us would ever become a reality.

I needed that I love you. The message in the mirror. A message that wasn’t for yesterday or tomorrow, but for right now.

As the message in the mirror started fading away with the steam, I began to think about Jesus and the well known story of the adulterous woman in John 8:1-11.

The Pharisees bring a woman caught in adultery to Jesus. They are trying to get him to abide by the law and have her stoned.

Instead, he kneels down. He writes in the sand.

He says “Let he who is without sin cast the first stone.”

And then he writes in the sand some more.

They all lay down their stones, walk away,  and the woman’s life is spared. Jesus says that he doesn’t condemn her and admonishes her to sin no more. I imagine that she listened to him and lived a more beautiful life after such tender forgiveness was granted to her.

There are so many things in that parable that can be explored, but the mysterious part of it that I want to look at today is that we are never told what he wrote in the sand.

But the truth is, we are never told what he wrote.

Why is this the case? Did the witness who wrote the Gospel of John not know? Weren’t the scriptures meant to record what happened? Why was this important detail left out?

Beyond that, this is the only recording of Jesus writing something down. So much has been written about him, stories that have changed lives and shaped cultures.

And yet the one time he wrote something himself, it was impermanent.

Why would he not write on a scroll, so that people could eternally read his words? Why not write letters that could be kept and dissected and theologized and memorialized?

I believe the answer is that this moment wasn’t for the throngs of people to come who would read the bible in the future.

This moment wasn’t for show.

This moment wasn’t for anyone else other than that woman, who so desperately needed mercy.

Whatever that message was, it was powerful.

Whatever that message was, it caused a crowd of people who were bent on judgement to lay down their stones and choose mercy instead.

Whatever that message was, it saved that woman’s life.

I believe we can find a life lesson here. There is such an important place for scripture and for eternal truth. But there is also so much beauty in what God is speaking to us in this very moment. He reaches into our own stories, the sand of our lives, and writes words that we need, right when we need them

When the Israelites walked through the desert, God rained down bread for heaven for them, every single day. But the one caveat was this….they were not allowed to save any of it for the next day, or it would rot. They had to gather what they needed for the day, and trust that God would give them what the needed when the sun would rise tomorrow.

Like Avie’s message in the mirror and Jesus’ writing in the sand, I will take the beautiful words that God gives me today, and let them guide me. Tomorrow, I will wake up and trust that new words will be waiting for me. As the literal paraphrase version of the Bible says in Proverbs 4:12 "As you go, step by step, the way will open up before you."

I can trust Him, step by step, to make a road as we walk. Right now. Today. In this very moment.

I don’t want to live on yesterday’s manna. I don’t want to be so lost in the pain of the past or the fear of the future that I am not present to the leading that God gives me, day by day.

Perhaps the message that Jesus wrote in the sand for the adulterous woman were similar to the words that Avie wrote on the mirror.