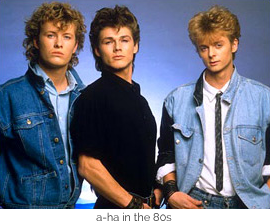 I woke up this morning with a song in my head;  the super nostalgic Take On Me by Aha, which came out in 1984.  The chorus says

In a day or two (yes that is what they are saying on that line that I have never understood since I heard this song in the second grade. The internet says so.)

Now, without any music playing in the real world, stop. Listen to that song on the stage of your mind. Even when it is silent on the outside, it is not silent on the inside.  Try to think of as much of the song as you can.

You can hear it, can’t you? But where can you hear it? Where the heck is that song coming from?  It is not outside of you, it is inside, as if you have your very own set of ears on the inside. Almost as if it is in a different dimension.

That “mind dimension” is something we experience every moment of our lives and yet it is such a mystery.

Now I want you to simultaneously hear that song in the background while picturing a band playing it in front of a McDonald’s sign. Close your eyes. See that awesome 80’s jam band in all of their florescent glory. One girl with big bangs is playing the bass. A child is listening on a picnic bench, eating an ice cream cone. All in front of those those golden arches, one of the most recognized symbols on the planet. (Thank goodness it’s for something as important as a 99 cent cheeseburger.)

You can see it can’t you? But where can you see it? Again, it is not physical. You somehow have eyes on the inside that sees that scene. Where is the scene you are seeing? On what plane are you viewing it? Could it perhaps be in a place that is not of this world?

An important thing to note here is that something deep inside of you was able to command your mind to hear that song and to see that scene. You were asked to have a thought, and you had it.

It seems from this exercise that we can control our thoughts. But can we control all of our thoughts?

I recently read that many psychologists believe that there are many thoughts that we can’t control. There are some thoughts that will come into our head that we did not consciously coerce to be there. They are called intrusive thoughts. The human brain is “constantly spinning around, trying to find an interesting problem to solve and to search for threats to our safety or existence.  The brain is particularly interested in thoughts that contain uncertainty” and we have the “faulty assumption” that humans have control over all of their thoughts.

Do you know what I felt when I read this? Relief. That the occasional dark thoughts that come into my mind are not always my fault. That the negative story line that is often running through my head might not have come from me. That I do not need to latch guilt onto those thoughts, but can just acknowledge they are there. They are intrusive because they don’t belong in my mind, and I can see them as such.

And yet, that Aha exercise I just gave you seems to indicate the opposite, that there is something inside of us that can generate thoughts as easily as we can order a meal of a menu.

It seems to me that the mind is a very complex place, with some thoughts that are invasive, coming from outside of ourselves, and others that can be generated by our own will.

The default that most of us have always lived into is feeling guilty when dark or anxious or unloving thoughts come into our minds. But what if there is a new way, a way that could revolutionize our thought life?

What if instead of feeling guilty about the thoughts that are invasive, we simply ask that inner voice inside us to generate a new thought to combat the dark thought we just had.

Better thought by better thought, we will begin to tear down the old stories and write a new one.

There is another remarkable thing to note about the Aha exercise. When I asked you to hear that song and see that scene, there was something inside of you that was not my voice that asked for that thought to be seen and heard. Who is the silent one who asks for the thoughts before the thoughts even come? The inner witness?

I like to call her the Compassionate Friend. The you that is you that is you. The Compassionate Friend realizes that she is not her thoughts. Rather, she is the one that is aware of her thoughts and is able to observe them and bring new thoughts when they are needed. Like a mother that calms her child by saying that everything will be all right, she chooses to generate positive thoughts to brighten the often dreary landscape of our minds.

As Paul Tripp says, “no one is more influential in your life than you are because no one talks to you more than you do.” Perhaps if we can learn to allow that Compassionate Friend to be the one doing most of the talking, the landscape of our mind would have more light touching it.

It would be wise for us to follow the example of David, who was in the habit of talking to his own soul.

Psalm 43:5 says, “Why, my soul, are you downcast? Why so disturbed within me? Put your hope in God, for I will yet praise him, my Savior and my God.”

He has that deepest voice say,  “Hey soul? Yeah you! I know that you are sad right now. I get it. I feel you. But I will yet praise him. I meaning the deepest part of me, the very spirit within me. The part of me that is able to turn my face towards God is the one that is going to be in the driver’s seat right now. So soul, I love you and all, but it’s time to get over yourself and worship God.”

I don’t want to downplay how all encompassing emotions can be sometimes. I have been faced with the Great Sadness many times in my life, and there is a time and a place to let ourselves emote. Our body and our emotions aren’t bad things. Jesus had a body, and he had emotions.

But I feel encouraged when I realize that there is something deeper than my emotions that I can tap into when I am encompassed in sadness. I feel empowered  when I realize that I can  learn to strengthen my truest self until it can say to my soul (borrowing lyrics from Jon Foreman,) “I dare you to pick yourself up off the floor.”

Perhaps, together, we can replace the dreary thoughts inside with more beautiful thoughts and revolutionize our thought lives.