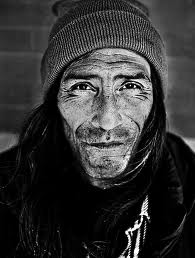 The Wheat the the Tares

You don’t often think that a visit to Mcdonald’s will change your life. Your cholesterol levels? Often. Your stomach digestion experiences, a given. But your life? This is rare.

I never used to go to Mcdonald’s, but every other Tuesday, right after work, I go to a contemplative spiritual formation group in Denver. I don’t have time to eat dinner until after the 9pm meeting, so I am usually starving afterwards. I inevitably end up at this Mcdonald’s and practice the brilliant trick my homeless friend taught me: order a double cheeseburger, hold the ketchup and mustard, add Big Mac sauce and lettuce, and voila! A semi Big Mac that is $1 instead of $4. I like to call it the swindle burger.

This particular Mcdonald’s is newly renovated, with a coffee bar and trendy lampshades. It reminds me a little bit of a mutt wearing a tutu.

Despite this Mcdonald’s shiny facade, the people that frequent here are anything but fancy. There are many homeless people that eat their swindle burgers here just like me. Every time I have been at this particular Mcdonald’s I have gotten into a conversation with a homeless person while I’m eating.

But the conversation this week was more than just interesting. It made me examine my life.

It was with Feather, a high cheekboned Native American man with a beautiful smile, even if it was a smile that was lacking a few teeth.

We talked about his life and his experience being a native American. The conversation took a more emotional turn when he told me that he had 7 kids from 4 different women.

“The youngest, he’s 16….how I love him. My sweet David. We just love each other so much. When we spend time together we laugh and laugh. But I’m an alcoholic, you see. I am so addicted. I’ve been on and off the streets for years because of it. And I hate it. I just hate it.

Now I have worked with a lot of homeless people and I love them. I really love them. But I know from past experience that a homeless person you are talking to will often say they are going to rehab or getting religion just because they don’t want you to see how broken they are. It makes sense that they have this defense mechanism in place because pretty much everyone judges them.

So I didn’t believe that he was going to rehab that night. But I still encouraged him.

“Feather, I would really admire you if you did that. You are a strong, strong person. Your son deserves to see you better, and you deserve to be better.”

I was reminded of a story in the Bible. The parable of the Wheat and the Tares.

The kingdom of heaven is like a man who sowed good seed in his field. But while everyone was sleeping, his enemy came and sowed weeds among the wheat, and went away. When the wheat sprouted and formed heads, then the weeds also appeared.

The owner’s servants came to him and said, ‘Sir, didn’t you sow good seed in your field? Where then did the weeds come from? ‘An enemy did this,’ he replied.

The servants asked him, ‘Do you want us to go and pull them up?’’No,’ he answered, ‘because while you are pulling the weeds, you may uproot the wheat with them. Let both grow together until the harvest. At that time I will tell the harvesters: First collect the weeds and tie them in bundles to be burned; then gather the wheat and bring it into my barn.’

If you asked most Christians about this parable, they would probably say that it is about the afterlife, God separating the good from the bad people. Maybe that’s true. I don’t know.

I wrote a poem about this parable when I was working full time with homeless people in San Francisco. (The names have been changed to protect my friends.)

The Wheat and the Tares

The beautiful and the ugly.

The holy and the evil.

The eternal and the temporal.

Every one of us

We are weak and strong at the same time.

The way she loves so deeply and the way she hates so deeply. Her fierce humor and fierce capacity to live. Anger and passion and goodness and pain mixed together in a complicated beautiful bundle.

But who covers his ears and yells because he is so, so scared.

Who is so gentle and so kind that when I got to know him I was shocked that he is one of the most violent gangs in Golden Gate Park. The way he makes me laugh until my belly hurts when we are playing cards.

But he won’t love himself enough to stop drinking. He thinks he is so engrafted in his life on the streets that the name of his gang is tattooed across his forehead.

The way he turned himself in to the police because he thought that it was the right thing to do. He inspires me.

Her sweet voice and her warmth and her smile that lights up everything around her.

Who tells me he’s my big brother and makes me laugh by saying “Elvis just walked into the room!”

But he also says that the only mistake God ever made was making him.

Who has so much wisdom in his small voice with his lisp that it brings tears to my eyes every time I hear it.

But he knows that his dream of going back to Detroit and having a house and a wife and children….he knows it will probably never happen. He has so much love in his heart and no one to give it to.

Who is so tenderhearted that he cries every time I sing. His six foot frame immerses me in love every time he hugs me. But he has so much rage that he can’t stay out of jail.

But I have such deep sadness and I hold on to the past and I long for a different life and I feel like I am not lovable. Even when God has told me again and again that I am.

The wheat and the tares. The beautiful and the ugly. The holy and the evil.

The enemy comes and plants the tares among the wheat.

And for now, they grow together.

He will tie up the tares in bundles

Until the smoke blows away

And all that is left

Is a beautiful, golden

As I was talking to Feather and thinking about the wheat and the tares, I suddenly saw an ambulance in the window.

He hadn’t been lying. He really was going to rehab. In that moment, I did not see an alcoholic. I did not see a homeless man. I saw a man who was so brave that he would face his biggest fear so that he could be a better father to his son.

I looked him in the eyes. “Yes Feather. Absolutely. There is no doubt in my mind that this night will change your life forever.”

“Ok, I believe you! Pray for me!” he said as he walked out the door and into the ambulance.

Feather, like all of us, are weak and strong at the same time.

(The picture above is not actually Feather and Feather is not his real name.)